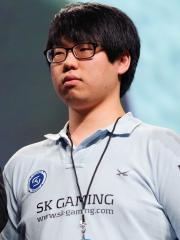 Jang "MC" Min Chul is one of the best performing Protoss players, with two GSL titles to his name. He is known for his various ceremonies after winning matches. He notably dressed up as a Murloc during 2011 MLG Providence Pro-Circuit and performed a ceremony for the crowd after a victory over Mvp.

On December 20, 2015 at HomeStory Cup XII, MC sung "Let it Go" from the Disney movie "Frozen" to celebrate the retirement of fellow StarCraft II player MMA.

At this time, MC is ranked #363 in highest overall earnings, and #38 in highest earnings for players from

MC has contributed to the competitive scene of the following games outside of competing in tournaments.