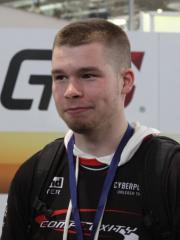 Crimsix's career as a professional Halo player was short, but he earned multiple top 8 placements in Halo: Reach on the MLG Pro Circuit. He switched to Call of Duty: Black Ops 2 when MLG replaced Halo: Reach with it on the on the Pro Circuit.

He achieve immediate success in competitive Call of Duty, winning Machinima Frag Cup IV together with Aches, FeaRs and Teepee on compLexity Gaming. On his first Call of Duty LAN, he placed 2nd at the UMG Chicago 10K, and he and his team continued to dominate for the rest of the Call of Duty: Black Ops 2 season.

coL Crimsix and the rest of compLexity Gaming continued to dominate the scene in the Call of Duty: Ghosts season, with their biggest achievement being the winner of the 2014 Call of Duty Championship and taking home the $400,000 grand prize. On May 6, 2014, compLexity sells their Call of Duty team to long-time esports rival Evil Geniuses. EG Crimsix and his teammates continue their domination of the scene under their new banner for the rest of the game.

During Rostermania at the beginning of the Call of Duty: Advanced Warfare season, Evil Geniuses CEO Alex Garfield announced that the player contracts for their Call of Duty team will be transferred to OpTic Gaming, and their buyout compensation will be passed along to the players, marking the exit of Evil Geniuses from the competitive Call of Duty scene. OpTic Crimsix and his team had a dominant start for the first few months of the Call of Duty: Advanced Warfare season, but suffered a disappointing 7th place finish at the 2015 Call of Duty Championship. As a result, Nadeshot – the captain of OpTic Gaming – announced his retirement from competitive Call of Duty. The team continued to dominate LAN tournaments for the rest of the season.

Going into Black Ops 3, Optic Would keep their team together, with Scump having the label of team captain, but Crimsix would still be the in game leader, or IGL. Optic would win 5 events that year, but once again, fail to win at Call of Duty XP Championships 2016, placing 7/8.

Going into Infinite Warfare, Optic would keep their team together again, and have Crimsix as their IGL. Being the favorite at every event yet again, Optic would win 4 events, with one of them being the highly sought Call of Duty Championships 2017, where Crimsix would then get his 2nd ring.

At present, Crimsix is ranked #115 in highest overall earnings, and #13 in highest earnings for players from

Crimsix has been awarded $16,000.00 in cash prizes from 2 tournaments within the last 90 days, none of which came in the last month.